Home / Blog / What are biodegradable plastics? The need for a clarified terminology

What are biodegradable plastics? The need for a clarified terminology

A while ago we put together an overview article of the issue of biodegradable plastics. Since the topic is still very relevant, we are sharing it again. It gives clarity on the terminology surrounding biodegradable plastics, their different uses and standards used in various regions. A one-page summary is available at the end of the article.

What are biodegradable plastics?

Biodegradable plastic is plastic which degrades under biological (mainly microbial) action. Some biodegradable plastics are compostable (but not all), which means they degrade under controlled conditions, such as those occurring at compost (or anaerobic digestion) sites.

Different biodegradable plastics only degrade under certain specified and tested conditions (e.g. degradable in soil, in wastewater treatment plants, etc), but most need industrial composting facilities1, which, as we’ll argue further on, is their reasonable destination. They may biodegrade in open environment, but the speed at which this occurs is wide-ranging, and related test methods and standards are not sufficiently defined and universally accepted. Compostable plastics need to further adhere to a set of requirements such as fragmentation, absence of ecotoxicity and threshold concentrations of potential pollutants such as heavy metals.

The focus of this article is on biodegradable plastic that is compostable, using mostly, and whenever appropriate, the term “compostable”. The focus relates to the fact that what matters from the angle of sustainable management of discards/waste, is the end-of-life behaviour of the materials, i.e. the possibility to be incorporated in compost schemes, and therefore to support separate collection (e.g. compostable bags) or to replace plastic items which would end up in disposal sites (e.g. compostable throwaway cutlery, when reusable cutlery is not suitable for the site-specific conditions, as e.g. local events in the countryside or disaster relief operations).

Bioplastics ̶ may mean either bio-based (see below) or biodegradable; it is therefore a confusing term, usually needing further clarification; it is not recommended to use because of that.

Bio-based plastic ̶ refers to the renewable sources used to make the particular plastic. For example, sugar cane is processed to produce ethylene, which can then be used to manufacture, for example, polyethylene (PE). Starch can be processed to produce lactic acid and subsequently polylactic acid (PLA). The properties of bio-based plastics can vary considerably from material to material.

They can be very different from biodegradable plastics in terms of applications and end-of-life management. They are often similar to regular plastic; just the fossil source is replaced with a biological one (meaning it can behave just like fossil-based plastic and should therefore go to recycling, preferably, or be disposed of). However, some bio-based plastics can be also biodegradable (e.g. PLA), but not all of them. 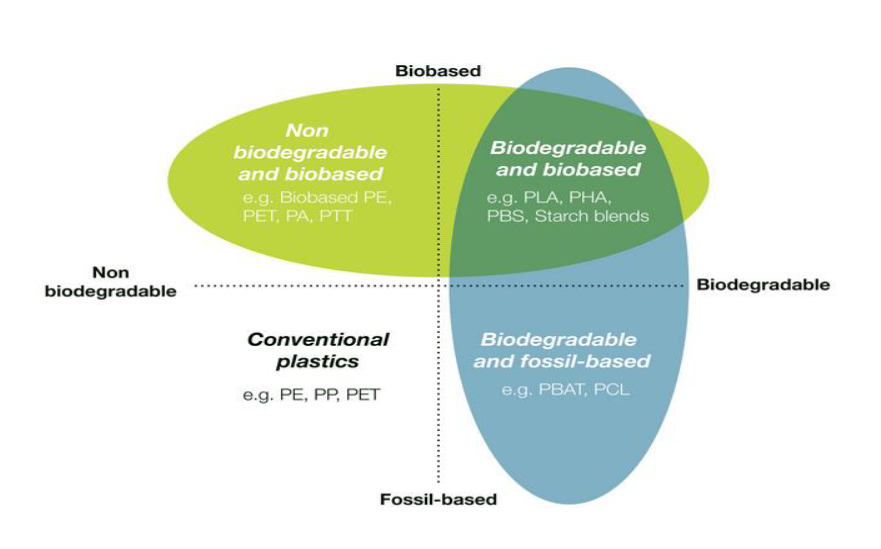 A specific case, worth separate consideration, is oxo-degradable plastics (sometimes also misleadingly called oxo-biodegradable) – they are neither bio-based nor biodegradable, but simply break into smaller fragments (hence, they can end up as micro-plastic). Therefore this term is generally regarded negatively from the environmental standpoint.

They are made from traditional polymers such as PE (polyethylene), PP (polypropylene), and PS (polystyrene) containing extra ingredients (metal salts). Oxo-degradable plastics are plastics made to break down into smaller fragments, not visible to the eye, in the presence of oxygen and sunlight, thanks to the addition of tiny amounts of metals like cobalt, iron or manganese2. As a result, they hamper composting (since they are not biodegradable) and recycling (since their breaking down harms mechanical properties of recycled plastics); they also represent a danger for the environment and the food chain, due to their fragmentation into micro-plastics. As a consequence, many NGOs have called on national institutions and international organisations for restrictions for such materials3; many countries, and the EU itself in the recently issued Plastic Strategy, have already formally expressed concerns about them, and will ban or restrict the use of this type of plastics4.

How to recognise compostable plastics? Standards and labels

Compostable plastics which are suitable for industrial composting have to meet specific requirements: compostability is defined by specific standards.

● ASTM D6400 is US standard for solid material biodegradation (by composting) required for labelling of plastics designed to be aerobically composted in municipal or industrial facilities5.

● EN 13432 is an EU standard where the key component is the need to recover packaging waste on the basis of industrial composting. The EN 13432 is considered as a solid reference for standards elsewhere as well; nowadays there is a trend to adopt similar requirements as EN 13432 also in the context of other standards, and ASTM standard itself was recently revised to align with EN (the same happened for the global standard ISO 18606). When related to non-packaging plastics (e.g. cutlery), the similar standard EN 14995 (which includes similar requirements) is used.

The key requirements of EN 13432 standard are:

✓ Biodegradation: chemical breakdown of materials into CO2, H20 and minerals. Pursuant to the standard, at least 90% of the materials have to be broken down by biological action in the testing conditions, within 6 months.

✓ Disintegration: the physical decomposition of a product into tiny pieces after 12 weeks; at least 90% of the products should be able to pass through a 2x2mm sieve.

✓ Quality of the final compost and ecotoxicity: the quality of the compost should not decline as a result of the added packaging material. The standard specifies checking this via ecotoxicity tests: this involves conducting an examination to see if the germination and biomass production of the plant are not adversely affected by the influence of composted packaging.

The EN 13432 standard specifies that packaging may be deemed to be compostable only if all the constituents and components of the packaging are compostable. Hence, all components must be tested. Compostable materials have to be labelled with specific logos, which guarantee that they are certified according to the compostability standard. A neutral competent third party has validated the conformity and guaranteed the monitoring of the product on the market.

When does use of compostable plastic make sense, when does it not?

Important note: Biodegradable plastics (including compostable) cannot and must never be seen as a 100% replacement to traditional plastics, and reduction must come first. The reusable option must always be considered first, if suitable to the specific operational conditions.

Most importantly, biodegradable (and compostable) plastics cannot be considered as a solution to the problem of littering, as an “easy to degrade” material in the open environment. They are, instead, a material to be incorporated in the separate collection of organics, and related compost schemes. As already specified, while we have consistent standards on compostability, there are still uncertainties around their biodegradability (and related test methods) in fresh/salt water, or the open environment, and related behaviour until they fully degrade.

Compostable plastics can therefore be considered for the following applications (the list is provisional, and refers to already considered and consolidated possibilities):

– compostable bags to optimise separate collection of organics (food scraps) and maximise captures of organics (increasing user-friendliness of collection in urban areas for example, where people typically are not able to do their own home composting);

– compostable tableware IF and WHEN reusable is not an option (e.g. events in the countryside with no connection to electricity/water for dishwashers; also, large exhibitions with reusable as the primary option for services at the table, i.e. restaurants, whereas for street/finger food one may consider compostable tableware);

– coffee capsules (traditional ways of making coffee are of course preferred whenever tailored to the specific conditions) and tea bags;

– AHPs (absorbent hygiene products) with reservations on a few current possible constraints. We prioritise reusable nappies (or for female personal care, use of alternatives6 if accepted by users) but compostable plastics may help for some particular situations (e.g. no tap water available). At present, nappies have additional problems (superabsorbent – SAP – the non degradable gel deemed to absorb water) whereas there are already female absorbents where SAP has been fully replaced by natural fibres, and polyethylene by compostable plastics, hence fully compostable.

– some specific wrapping packaging for fruit/vegetables on the shelf. Although we prioritise packaging-free shops, this may take time to diffuse and promote, and compostable wrappings may be a transitional Plan B in the meantime.

Compostable plastics are not recommended for:

b) it does not make much sense to use compostable bags or cutlery where home composting is practised. This is also why we have a marked preference for standards making reference to degradability in centralised composting, and not in home composting systems.

– replacing packaging plastics (e.g. bottles) as a “selling point” for the producers, because

a) this would confuse households, who may find it difficult to determine, from time to time, whether an item is made of biodegradable or traditional plastics, and

b) since packaging has a very low density (weight per unit volume) while that for food scraps is typically much higher, collecting bottles and other packaging together with food scraps would harm one of the operational conditions for cost-optimised collection of bio-waste, i.e. high bulk density that allows use of small open lorries instead of big packer trucks.

Why is it important to send compostable plastic to composting?

Biodegradable (and compostable) products are not necessarily more environmentally friendly when disposed of in landfills (rather, the opposite is true). Biodegradable materials, such as disposable cups and utensils, are broken down in landfills by microorganisms (similarly to composting, but in an anaerobic environment, i.e. in the absence of oxygen) which then produce methane. Methane can be a valuable energy source when captured, as in an anaerobic digestion site, but is a potent greenhouse gas when released into the atmosphere, which happens for a relevant part of methane from dumpsites and even from controlled landfills.

Download a summary of this article for easy sharing and reference.