Home / Blog / WHY PEOPLE WHO RECYCLE ARE THE MOST DETERMINED MINORITY IN TODAY’S WORLD?

WHY PEOPLE WHO RECYCLE ARE THE MOST DETERMINED MINORITY IN TODAY’S WORLD?

On the 15th of September 2018, nearly 18 million people united to pick up trash from the nature in 157 countries. It was the biggest civic action against waste and yet, it was still not enough. All the trash collected amounted to half of what is generated in Indonesia in just one single day. Only 15% of it made it to recycling.

So while we keep up with the tradition of World Cleanup Day, we should also continue to see it as an alarm clock reminding us that the pace of waste generation today will outrun any volunteer efforts. Globally, only an estimate of 20% of all our resources ever make it to recycling while the rest ends up burnt openly or in incinerators, landfilled or dumped in nature.

In addition to World Cleanup Day efforts it is important to tackle the problem at source. While people can have a comparatively similar impact when cleaning, they can have a substantially greater impact as influencers in their communities. This is why we put together a helpful guideline – the Keep It Clean Plan, to help anyone get started who feels they could do more. 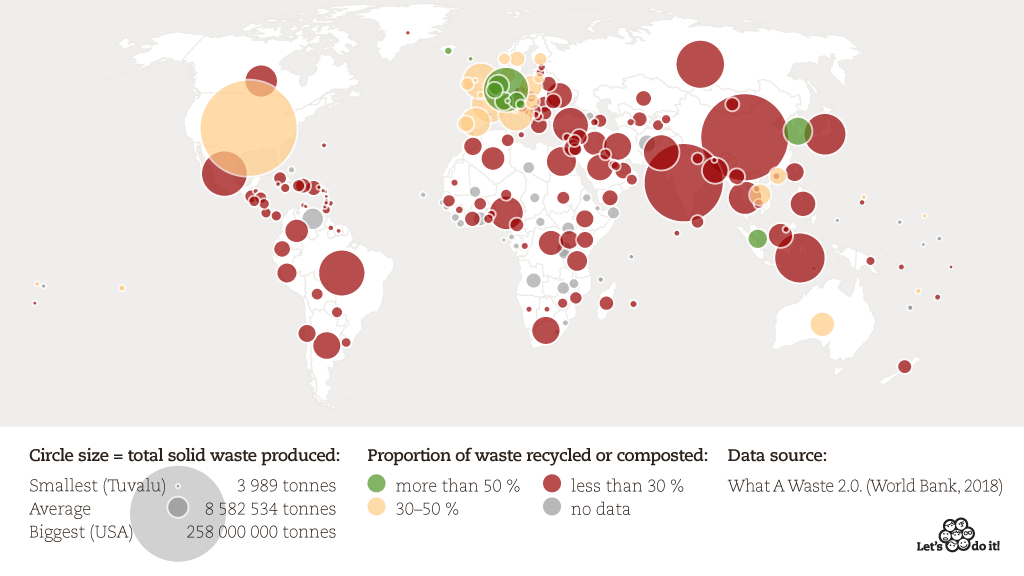 Where is the problem the biggest?

The honest answer is – no one knows! We tend to notice it most in the global south but numbers show, that the most wasteful countries are the most developed. The world generates 2.01 billion tonnes of municipal solid waste annually, with at least 33 percent of that not managed in an environmentally safe manner. Though they only account for 16 percent of the world’s population, high-income countries generate about 34 percent, or 683 million tonnes, of the world’s waste. When looking forward, global waste is expected to grow to 3.40 billion tonnes by 2050.

Data and statistics backing up global decision-making is often outdated, flawed or just missing and it is suffering a solitary destiny in ‘available online’ reports.  How could we possibly know if we are making progress or failing on our way towards a clean world?

Let’s Do It Foundation has been working to collect enough data and develop expertise to predict leakages from circular economy before it even happens. To date we have built the World Waste Platform– a central database of mismanaged waste and WADE – waste detection computer vision algorithm that will identify (and possibly classify) trash visible in any picture or video.

It is not just about the consumption

Unnecessary, problematic, and excessive single-use packaging is one of the core reasons for an overwhelming waste pollution in the world. A pollution that is made up largely of plastic. Our society is inundated with messages about “litter” and “cleanups” that leave individual consumers believing and feeling guilty that they are the cause of the plastic pollution crisis. Many of the solutions put focus on collection and recycling, despite years of persistently low and falling plastic recycling rates worldwide.

So, when talking about the mismanaged waste found in nature, we should be careful not to jump to conclusions. People’s disposal habits and care for the environment are just the tip of the iceberg. The international story told around polyethylene terephthalate (PET) is that it is very recyclable and has a high value on the market for post-consumer recycled material. Yet as we see in the dramatically varying PET recycling rates by country and by region, “recyclable” does not necessarily mean “recycled” (United States 29%, Europe 48%, Japan 72%, India 80%). As of 2016, an independent analysis found that we are now producing more than 1 million PET bottles per minute worldwide.

Looking at the map, you see that even if all the world’s waste was collected, we lack the ability to treat it right. The solutions lay with dealing with the production volumes and waste management systems. And this is a global problem. Many high-income countries have exported their waste to poorer countries as a key strategy to deal with domestic post‐consumer waste. In 2017, Europe exported one‐sixth of its plastic waste, largely to Asia. For many years, China imported the lion’s share of the world’s old packaging, and other plastic scrap. The imports however were contaminated and difficult to recycle resulting in these waste polluting vast areas of Chinese territory.  In January 2018, China closed its borders to other countries’ recycling waste and since many countries have had to look for new ways to deal with their waste. Norway’s proposed amendments to the Basel Convention in 2019 provides countries the right to refuse unwanted or unmanageable plastic waste.

What stops the progress

Unfortunately, the rich part of the world’s response has been largely weak. Just 0.3 per cent of Official Development Assistance (ODA) is spent on solid waste management. Historically, donors have also focused on ‘white elephant’ projects such as large incinerators, which are ill‐suited to the types of waste and regulatory environment present in most low‐ and middle‐income countries. Increasing the volume of aid for waste management from 0.3 per cent to 3 per cent could allow all 2 billion people currently without waste collection to be reached, simultaneously protecting the environment, improving public health and creating jobs.

A growing number of corporations are pledging to pursue higher recycling goals while civil society organizations are also staying vigilant on the goals to reduce the amount of packaging and other waste generated by the global producers. It is just not realistic that only improving recycling would make much difference.

The good news is that in the last year, more progress is made in dealing with waste than in the past 20 years.  However, in the next 10 years we anticipate the plastic production to increase by 40%. This makes every step we have taken to the right direction seem like a drop of water in the ocean. But at least a clean drop. Solutions are not in the right words we speak but in the actions we take. What is your Keep It Clean Plan?

Partnering with the 25+5 SDG cities